(This is Part XVI. Click here to read Throwing Stones Part XV: For A Song)

In Part XV, Allen Klein signed The Beatles. But a growing rift between Klein and the Stones threatened to scuttle their upcoming American tour.

The cold war between Allen Klein and The Rolling Stones grew hot in the summer of 1969. After years of frustration, the band had tired of their American manager’s refusal to explain their cash flow. Or their lack of cash.

All of group’s income went directly to Klein. Incredibly, the Stones had no idea how much was going out or coming in. Band members received no regular financial statements and little in the way of income. When they requested funds for major purchases, they were required to sign loan agreements stating they were borrowing the money. Random documents arrived unexplained in the mail, including letters informing them that personal bank accounts in their names had been opened in America. A modest check would occasionally turn up as well.

Klein claimed his mysterious methods were helping the Stones avoid England’s extraordinarily high taxes. The Stones suspected he was lowering their taxes by keeping the bulk of their earnings for himself. The band hired a British law firm to pry information out of Klein, but the wily American had little trouble keeping well-mannered English solicitors at bay.

Mick Jagger decided Klein had to go. But Jagger was busy acting in a movie in Australia at the time, and left it to Keith Richards and newly hired road manager Sam Cutler to can Klein. Upon hearing the news, Klein simply refused to be fired. He had a contract and wasn’t about to budge. And now that they had crossed him, he wasn’t about to give the Stones a nickel to fund their upcoming American tour.

As so often happened, the Stones dreamed up a ridiculous solution that never should have worked but did. They hired Allen Klein’s twenty-six-year-old nephew, Ronnie Schneider, to handle the tour. Schneider had worked for his uncle when Klein and the band were still getting along. His responsibilities included shepherding the Stones around the States on their 1965 and 1966 treks. The Stones knew him, liked him and trusted him.

Schneider told the band that he would have to get his uncle’s blessing before taking the job. They were fine with that. Since Klein still viewed himself as the band’s manager, he was fine with his nephew getting the gig. Only one problem remained. Somebody had to come up with the cash to fund the tour.

Ronnie Schneider was smart, hardworking, enthusiastic and too inexperienced to know what he was up against. But he’d learned a few tricks from his Uncle Allen.

The William Morris Agency was in the final stages of nailing down a deal to book the tour when Klein butted heads with the band. Ronnie Schneider snowed the Morris agents, telling them he was going with a different firm. Having finally learned the value of rock ’n’ roll, William Morris was desperate to hang on to the year’s hottest tour. They agreed to cut their commission in half and put up $15,000 of funding.

Schneider then leaned on local promoters, demanding an unprecedented 50% advance and a cut of the gross receipts. Smaller venues were to be passed over in favor of large arenas. Some would feature two shows a day. Ticket prices would top out at $8, a major sticker shock at the time. Nobody knew if the Stones could fill all those seats. But nobody wanted to risk losing them, either.

Schneider kept control of all merchandising, licensing and ancillary rights within the Stones’ organization, funneling more money into the bands’ coffers. The cash-strapped Stones and the erstwhile Schneider didn’t realize it at the time, but they were creating a new business model for the concert industry. It remains in place to this day. 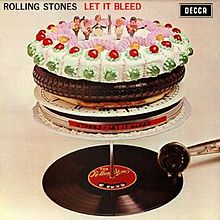 Well-known filmmakers the Maysles brothers were contracted to film the tour for a documentary. A live album was planned, moving the band one step closer to fulfilling its contract without the need for new material or expensive studio time. The tour was scheduled to wrap at the end of November. The band’s new studio album, “Let It Bleed,” would hit the shelves just a few days later. Sales were sure to be boosted by the tour’s press coverage, another Ed Sullivan appearance and the holiday shopping season.

It promised to be a very, very merry Christmas for The Rolling Stones.

Ronnie Schneider had rolled the tumbling dice and pulled off a showbiz miracle. Now it was the Stones’ turn. If anything went wrong during the first third of the fourteen-city tour, the lack of adequate upfront funding meant the entire enterprise would collapse like a house of cards.

The Stones did not disappoint. The arenas were packed. The band roared. The audiences were putty in Jagger’s hands. The reviews were ecstatic. The press ate it up.

Things were going so well that the band added a festival date in Florida. They even decided to headline a free show in California, an idea first pitched to them by members of The Grateful Dead. Mick Jagger told the press that the free festival was their way of thanking the fans and extending the spirit of Woodstock, the three-day music marathon that had captured the world’s imagination that summer. He didn’t mention that they hoped it would counteract the bad PR generated by their high ticket prices and provide a glorious grand finale for their tour documentary as well.

And so, with all the best intentions, the Rolling Stones unwittingly put themselves on the road to a place called Altamont.