Part XVIII traced the symbiotic relationship between the Hells Angels and the Bay Area music scene, and the road that led the Angels to Altamont.

Forty-five years ago this week, Mick Jagger and Keith Richards slipped into a limo and left  the holiday lights of San Francisco behind. Joined by  Tour Manager Ronnie Schneider, bodyguard Tony Funches and writer Stanley Booth, they travelled to the Altamont Motor Speedway, the site of the free music festival the Stones were scheduled to headline the following day.

All appeared well when Jagger, Richards and company arrived at Altamont that chilly northern California night. Tens of thousands of concertgoers were already settling in. Camp fires peppered the hills, and people seemed to cover every square inch of ground. The rockers left their limo and began checking things out on foot. Friendly fans tagged along in the darkness, but nobody hassled their heroes. Tony Funches bummed a joint at Mick’s request. Bottles of wine were shared. A communal spirit filled the air.

Both Jagger and Richards said the scene reminded them of Morocco. Ronnie Schneider has described it as mystical. Stanley Booth would later realize that the seductive, dreamlike quality of the experience had obscured the site’s shortcomings. “The night before was like Morocco,” he wrote, “but it was also like anything you wanted it to be.”

Keith Richards decided he liked the mood so much that he would spend the night. Spying a flimsy fence that had been flattened by the crowd, Richards chuckled. “The first act of violence,” he joked. His casual wisecrack would prove disturbingly prophetic. Booth remembers the group’s limo running out of gas before they left, but Schneider says they merely worried about having enough to get back to the city, which they did.

On Saturday, December 6, helicopters ferried Mick Jagger, Mick Taylor, Charlie Watts and the tour staff to the speedway. Everything looked shockingly different in the light of day.

Though less than 100 miles from the California coast, the landscape was dreary, brown and overrun with scrub growth. The highway leading to the raceway had been transformed into a giant parking lot, as carloads of people surrendered to a massive traffic jam, abandoned their vehicles and walked to the site. Broken glass, windblown trash, and the rusting hulks of totaled demolition derby racers littered the area surrounding the rundown track.

Festival organizers had expected over 100,000 people. Over 350,000 showed up. Food, water, shelter, communications, emergency medical care, toilets and trashcans were all in dangerously short supply. But there was no scarcity of drugs, booze or Hells Angels.

Trouble started as soon as The Stones touched down. A young man rushed Mick Jagger and punched him in the face, screaming, “I hate you!” Jagger composed himself quickly, shouting “Don’t hurt him!” as the man was dragged away. 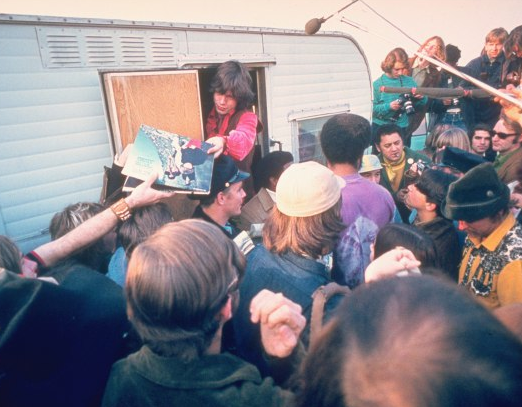 Tony Funches couldn’t believe his eyes. The “backstage” area consisted of a few scattered trailers and a large tent. There were no barriers and next to no fencing. The small force of private security guards hired by track-owner Dick Carter was far more interested in protecting property than people. Funches’ military experience had taught him the value of a defined perimeter. But establishing one at Altamont was impossible.

The band stuck to the tent and trailers, awaiting the arrival of bassist Bill Wyman, who had opted to do some Christmas shopping and make the trip to Altamont by car. Out front, Tour Manager Sam Cutler was struggling to keep people off of the stage, which several attendees saw as an ideal platform for political speeches. Others just wanted to be where the bands were. Fearing the low stage would collapse under the weight of these self-invited guests, Cutler asked the Hells Angels to help him keep non-musicians off of it. To his dismay, it was soon crowded with bikers.

A literal busload of Angels had arrived at Altamont the previous day, staking out “Angel Land” near the speaker towers. Many, many more showed up on Harleys. While both Charlie Watts and members of the Maysles brothers’ film crew have stated that they encountered individual Hells Angels who were sober, helpful and easy to get along with, the majority of the bikers in attendance were none of the above. They soon made their presence felt. 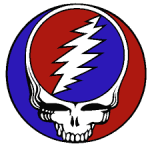 The Angels had begun drinking early. Complicating matters, legendary San Francisco underground chemist Owsley Stanley and others were handing out free LSD, and Angels were downing the drug by the handful. At least one of the batches being circulated was laced with methamphetamine. The result was a potent hybrid that produced nightmarish hallucinations and paranoid, hair-trigger aggression—the worst of both worlds.

The Angels weren’t the only ones getting loaded. Zonked-out fans quickly became a danger to themselves and others. Some unwittingly dosed themselves when they took swigs of wine from jugs that, unbeknownst to them, were spiked with acid. Georgia “Jo” Bergman, the Stones office manager, was shaken to discover a sea of “nasty, mean stoned people” instead of “happy, cheerful stoned people.” Sam Cutler said it was as if San Francisco had been destroyed by a nuclear bomb and the desperate survivors had all fled to Altamont.  Angels roared through the audience on their Harleys, further rattling the tightly packed crowd. The bad vibes were reaching the boiling point.

An opening set by Santana was interrupted by several minor incidents. Confrontations intensified, then calmed down a bit when the Flying Burrito Brothers played. But clashes between the Angels and the crowd escalated with alarming speed during the Jefferson Airplane’s performance. Groups of Angels armed with pool cues were delivering savage beatings to anyone they felt was out of line. Other gang members amused themselves by hurling full cans of beer at audience members’ heads.  The first aid stations were overwhelmed with overdoses and skull fractures. Airplane vocalist Martin Balin began criticizing the Angels’ violent behavior. A biker quickly retaliated, knocking the singer unconscious. Balin came to, confronted the Angel, and was coldcocked again.

Local favorites The Grateful Dead were scheduled to appear after Crosby, Stills & Nash. The Dead arrived, assessed the scene, and departed without playing a single note. That left the audience waiting for The Rolling Stones, who were waiting for Bill Wyman, who was stuck in traffic. The situation continued to deteriorate as darkness fell. Wyman finally made it through. The Stones took the stage, surrounded by a claustrophobic combination of anger, anticipation and dread. The crowd pressed forward. The worst was yet to come.

(This concludes Part XIX. Click now to read Part XX: A Shot Away!)