Throwing Stones XX: A Shot Away

Part XIX brought the Stones to the stage at Altamont.

Mick Jagger eyed the tightly packed sea of fans with a worried glance as the Stones plugged in, then broke into his trademark grin. Jagger had spent the 1969 tour urging fans to get up and dance. Now the most famous frontman in rock kicked off a show by telling the band’s largest audience yet to “just keep still.”

The Stones launched into “Jumping Jack Flash,” but the music wasn’t enough to change the mood. The stage remained crowded. The crush up front grew worse. The clashes between the Hells Angels and the audience grew more frequent and ferocious. 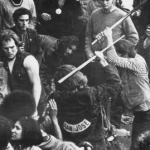 Large areas would suddenly clear of people as Angels waded in with their pool cues and concertgoers scrambled to avoid the mayhem. As soon as the Angels moved out, the crowd poured back in. Unable to see much beyond the first few rows, the Stones could tell things were going terribly wrong, but could discern few details.

The show ground to a halt during “Sympathy for the Devil” when a Harley parked in front the stage caught fire. Apparently, the crowd had pressed down on the bike’s seat, causing its shock absorbing springs to contact a battery post. Bikers leapt from the stage to smother the flames and exact revenge. Why the Angels had parked their bikes between the crowd and the stage remains a matter of debate. Some claim it was a deliberate provocation intended to show the fans who was really in charge. Others say it was to keep the audience away from a speaker that had shorted out earlier and, ironically, sparked a small fire. 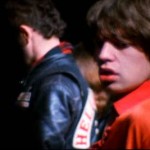 Jagger pleaded for peace, and things calmed down long enough for the Stones to resume “Sympathy.” But additional confrontations occurred as the song drew to a close. Downshifting to slower material had a brief, soothing effect, but the violence soon returned.

Keith Richards fearlessly called out the Angels, warning them that the band would not continue if bikers kept beating people up. An Angel grabbed a mike and scolded the crowd like an enraged parent, telling them that if they didn’t behave they would be sent home with no more music. Begging for harmony, a shaken, exasperated Jagger told the crowd to sit down. Most of them did. The band began “Under My Thumb.”

Meredith Hunter, an 18-year-old African American student, wasn’t interested in sitting down. Hunter had taken methamphetamine, and was determined to work his way to the stage, ignoring the pleas of his girlfriend and Mick Jagger alike. Hunter reached his destination, only to have a couple of Angels rough him up and heave him back into the crowd. When more Angels headed his way, Hunter made a fatal mistake. He pulled the .22 caliber revolver that he had tucked in his pants and hidden beneath his jacket.

A Hells Angel named Alan Passaro drew a knife and launched himself at Hunter with astonishing speed. Parrying the pistol, Passaro stabbed Hunter repeatedly. Other Angels swarmed in and began stomping Hunter as soon as he hit the ground.

Frustrated by yet another eruption, the Stones stopped playing long enough to be told that someone had pulled a gun and been removed from the audience. They called for a doctor , asking the audience to make way as necessary.  They were not told that Meredith Hunter had been stabbed, and had no way of knowing that he had died within minutes of being taken to a first aid station.

In the song “Gimme Shelter,” the Stones had warned that the line between chaos and civilization was far thinner than most people realized. Altamont taught them just how right they were. Caught in a phantasmagoric nightmare that threatened to explode into a full-blown Angels vs. audience riot at any moment, the band had little choice but to continue the show. They felt as if they were literally playing for their lives. They probably were. 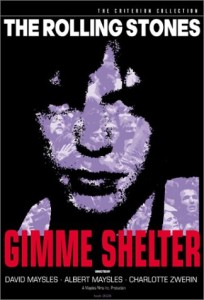 The Stones closed with—of all things—“Street Fighting Man,” and hurried offstage. Cars rushed the band and the terrified touring party to a helicopter that was waiting on the racetrack. Seventeen people squeezed into a chopper designed to carry no more than twelve, and the overloaded whirlybird struggled into the air. Keenly aware that he was carrying too much weight, the pilot kept his altitude low as he flew to the tiny airport in nearby Livermore. After a bumpy landing, the band and its associates returned to San Francisco by car.

Meanwhile, back at Altamont, stage and lighting designer Chip Monck began packing up equipment. When the exhausted Monck tried to stop three Hells Angels from making off with the Persian carpet the Stones used on stage, the bikers knocked his front teeth out. “Woodstock West” was over. But the backlash was just beginning.