In Part III, Andrew Loog Oldham, the Rolling Stones first manager, successfully badgered Mick Jagger and Keith Richards into writing songs, while  writing some masterful PR of his own.

As Britain’s colonial empire vanished into history, a new empire built on entertainment appeared to be replacing it. Suddenly, British fiction, fashion, films, theatre, television and music were finding fans around the globe. Rolling Stones manager Andrew Loog Oldham was the new English entertainment industry incarnate: the hippest manager in the U.K., a hotshot record producer and a partner in an ever-growing string of showbiz entities. A closer look reveals the cracks in young Andrew’s fab facade.

Oldham loved movies. He was obsessed with one in particular, the 1957 American noir potboiler Sweet Smell of Success. In the film, Burt Lancaster plays J.J. Hunsecker, a nationally syndicated gossip columnist with his own radio and TV show. The all-powerful Hunsecker is a ruthless bully who enjoys nothing more than ruining lives and destroying careers. His creepy fixation on his adult sister, combined with his hypocrisy, self-importance and twisted delight in blackmailing corrupt cops and desperate press agents into doing his dirtiest work make J.J. Hunsecker one of the most despicable characters in screen history. In fact, he’s number 36 on the AFI’s list of the greatest movie villains of all time. 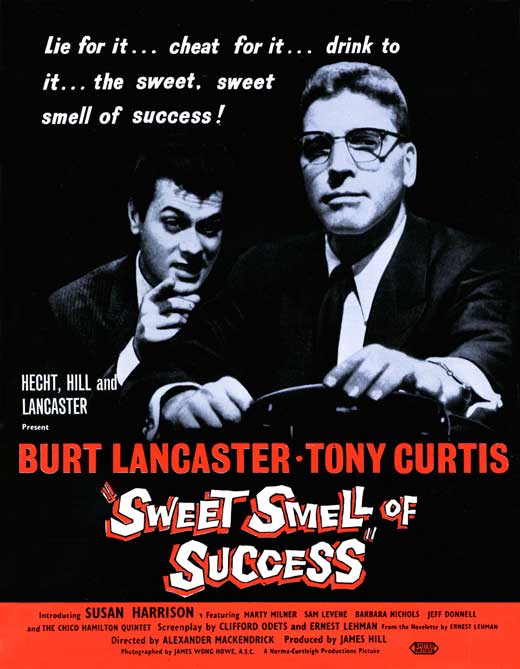 Andrew Loog Oldham seems to have missed the point. Oldham fantasized about becoming the living embodiment of J.J. Hunsecker, and dreamed of a day when the entire entertainment world would bow before him or suffer accordingly. It was as if he had seen Shane and mistaken Jack Palance’s psychotic gunslinger for the hero.

Oldham’s business relationships tended to degenerate into grudge matches with astonishing speed. Oldham and Stones co-manager and booker Eric Easton fell out in short order. Oldham claimed Easton was a sneaky old fuddy-duddy who envied his youth and celebrity, cheated him out of his fair share of commissions and demanded kickbacks on the band’s live gigs. Easton’s defenders, who include Bill Wyman, saw Easton as an honest old-timer who quickly tired of Oldham’s inflated ego, erratic behavior, and focus on his own fame.

Rather than sort out matters with his partner, Oldham threw himself into another venture. And then another. A pattern soon developed. Whenever Oldham got into a dispute with a partner in one company, he found another partner and started another company, creating a trail of dysfunctional businesses and unresolved issues.

Ignoring Easton’s advice that a manager should never get too close to his clients, Oldham moved in with Mick Jagger and Keith Richards. He stuck close to his lads, enjoying all the perks of a rising rock star. The young Stones were a magnet for sex, drugs and booze, and Andrew Oldham was in no mood to say no to any of the above.

Oldham started producing instrumental versions of  Stones’ numbers, employing his new roomies as session players.  Jagger and Richards appreciated the extra income, as did Oldham, who had no qualms about using his “Andrew Oldham Orchestra” tracks as B-sides of singles he produced for other artists. It was a trick Oldham had learned from his idol, Phil Spector. The fact that a B-side credited to a different act than the artist on the A-side might confuse young record buyers and would deny the artist the easy income gained from a flipside didn’t bother Oldham.

Oldham soon set about turning his Sweet Smell of Success fantasies into reality. Making matters worse, he added a dose of the droogs, the brutal young gang in Anthony Burgess’ 1962 novel A Clockwork Orange. Alex, the book’s narrator, enjoys committing random acts of violence to entertain himself and his friends. Once again, Oldham made a fictional fiend into a personal hero. (Oldham tried to option the book and cast the Rolling Stones as the gang, but someone else had the film rights sewn up. Stanley Kubrick would eventually direct, sans Stones.)

Oldham hired a handsome sociopath named Reg to serve as his chauffeur. Reg’s real job was to intimidate or physically attack anyone Oldham imagined had crossed him. One of Oldham’s favorite past times involved instructing Reg edge alongside another car at a traffic light. When the light changed, Oldham would lean out and punch the stranger in the car beside his, then order Reg to speed them from the scene.

Oldham continues to lovingly recount the day he tired of a young music reporter’s remarks about Keith Richards’ pimples. Andrew and Reg burst into the reporter’s office, jammed the man’s hands beneath an open window and threatened to crush them if the writer ever typed another word about the guitarist’s acne.

Andrew’s amateur gangster antics would have been shut down with brutal efficiency (and most likely, efficient brutality) in the mobbed-up American music business of the 1960s. But the stuffy old sirs who ran English show business had no idea what to make of Oldham’s third-rate thuggery.

As his mania for drink, drugs and delusions of grandeur spun out of control, Andrew Loog Oldham failed to notice that Mick Jagger and Keith Richards were growing annoyed with his behavior. Though they had once found Oldham’s shenanigans amusing, Jagger in particular was developing a keen sense of what it took to succeed in show business, and the singer began to regardi his band’s wunderkind manager/producer as more of a liability than an asset. Oldham should have re-read A Clockwork Orange and taken note of the scene in which the droogs finally tire of Alex’s high-handed self-regard and decide they’d rather run the show themselves.